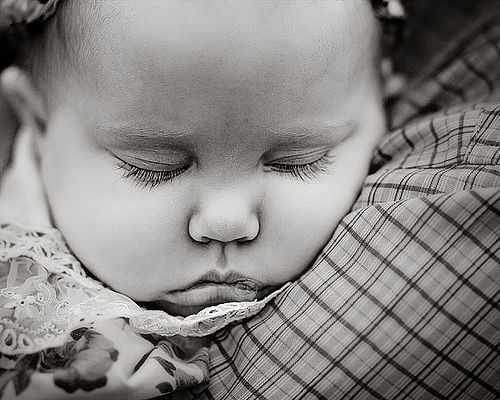 Whoever made up the phrase “sleep like a baby” obviously never had one!

Sometimes I get insomnia. I have always had trouble sleeping, even as a kid, although back then my insomnia dressed itself up as an imaginary friend who would keep me up at nights, pacing around my room and asking tough questions like, “What do you think happens when you die?” and, “Why does Santa hide all the Christmas presents in your parents’ closet?” I guess I had more of an imaginary Barbara Walters. Anyway, the point is that I have always had trouble sleeping, but it has only gotten worse as time goes on. I guess because as I got older, I discovered more things to worry about. (Though I am still up most nights trying to figure out why Santa hid all the Christmas presents in my parents closet!)

Then once I had a child, a solid night of sleep became a distant memory. Now there are numerous lists to make, hundreds of things to prepare for, and gazillions of irrational fears to worry about. It is a wonder that I am not a total zombie. However if you are reading this and there is something that I forgot to do for you or there is something that I did to otherwise piss you off… it’s because I am a zombie.

The past week or so, I have had another bout of insomnia. I either go to bed early, hoping to catch up a bit on sleep, or I stay up late, afraid to even try to fall asleep. Either way, the result is the same:  toss and turn for a few hours, move to the couch, toss and turn, move to the guest bedroom, toss and turn, until finally I drift off into a fitful sleep a few hours before it is time to wake up.  Last night I tried the stay-up late technique. Instead I watched The Real Housewives of Beverly Hills. Bad idea. You should never watch anything so frightening before trying to sleep. Finally I crawled into bed, exhausted, only to spend another couple of hours tossing and turning, before finally managing to fall asleep around 2:15 am.

My daughter is a pretty good sleeper. If she wakes up in the middle of the night, normally all it takes is a little pat on the back and kiss on the forehead, and she is back to dreamland and I am back to sleep and/or tossing/turning/worrying. Last night, however, I gave her a pat and a kiss and then stumbled back to bed, but she did not fall blissfully back to sleep. Instead she cried until I went back into her room. After trying this a few more times with the same result, I decided that perhaps she had insomnia too. I hope that she never has insomnia the way that I do, but sometimes it amazes me how in sync the two of us can be. So, I covered myself up with her little quilt and laid down next to her crib.

She would close her eyes for a few minutes, then peek her head up to make sure that I was still there, smiling at me before putting her head down again. After a while I saw a sweet, chubby, little hand poke through the bars of her crib. So I took it. We held hands like that until she finally drifted off to sleep. And then, amazingly, I did too. I slept for an hour there. The most solid hour of sleep that I have had all week, right there on the cold, hard floor, with my daughter’s soft, warm hand in mine. I finally woke up and went back to my bed. Of course I had a hard time falling asleep again, but this time because I was happy, not worried or stressed.  And I woke up this morning tired, but with a new clarity.

I think that this is exactly what parenting is all about:  Holding your little one’s hands, and then only later realizing that maybe it is they who were really holding your hand.
photo credit: thejbird via photopin cc

Sleeping with the Enemy?

It was exactly 9:07 last Tuesday night when my husband uttered the phrase, “Now that Lyla sleeps so well, I kind of miss those middle-of-the-night wake-up calls.  Sometimes I wish she would wake up, so I could ‘rescue’ her.”  Two nights later, our little angel granted his wish by waking up at 9:30 and refusing to go back to bed until 2 am.  Because my husband had so longed for those sweet sleepless nights, I obliged him.  I let him spend the night singing, feeding, rocking, walking, cursing, praying and shushing, while I spent it sleeping – ahem – like a baby.  You’re welcome honey.  Sometimes my selflessness amazes even me.

However, I wasn’t laughing when it was my turn on Sunday night.  She woke up  at 10 and I couldn’t get her back down until 1.  I then spent the next hour or two tossing and turning, and snapping my head up to look at the monitor any time she made the slightest peep.  I finally drifted off to sleep (it was actually more like plunging into exhausted oblivion) around 2:30 AM, where I dreamt my standard anxiety dream of waiting tables and realizing that I forgot to place a bunch of tables’ orders, over and over again until 5.  It was then that I heard the siren call of my daughter.  I tried to resist the call and let her fall back asleep on her own, but alas I could not.  Instead I scooped her up and rescued her from whatever invisible assailant was tormenting her.

I sat down with her in the rocking chair to rub her back and caress her head.  After a few minutes, she curled up on my chest, tucking her arms under her, and began to snore lightly.  And despite the stiffness in my neck from trying not to move and the pool of sweat forming under my shirt from her hot little body, I didn’t miss sleep a bit.  I now had a few hours to sit and study her perfect little features, inhale her sweet baby smell (it still hasn’t gone away,  thank god) and think.

I make it a point to try not to judge parents.  I know just how hard it is to be a parent and to make all the decisions that the title requires.  I know that most parents are simply doing the best they can for their children and for themselves, and that every parent makes educated decisions based on what they think is right.  My husband and I made the decision not to bring our daughter into our bed with us.  That decision was based on some stories that friends have told us, some books that we have read, and mostly for the purely selfish reason that if my daughter was in my bed I would be too terrified to ever sleep.  If she is even in the room with me, I am constantly jolted awake by nightmares that I have fallen asleep with her in my arms and have rolled over and crushed her.  So, putting her in my bed is not really an option for me… not if I ever want to sleep again.

People feel quite strongly about the topic of sleeping with your children.  There are some, especially the Attachment Parenting proponents, who feel that co-sleeping creates security for the child.  Mostly though, I feel that co-sleeping is often villainized.  Many doctors warn that it increases the chances of SIDS, which is hard to argue with. That is probably the root of my intense fears.  However, my daughter is past the age where SIDS is a major concern, and still I never put her in my bed. It was the parenting decision that we made, and for us I think it is the right one.  But sitting in the chair with my daughter sleeping so close to me, I totally understood why some parents choose to have their kids sleep with them… or let themselves fall into that pattern.  I was struck by how close I felt to her – almost as though I was pregnant again, only now I could study her every feature in a way that she would never allow me to do while she is awake.  I was reminded of how short our time is with our children.  How quickly all of these moments will pass and then will soon be over.  If every moment is so precious, then sleeping with your child somehow feels like a way to steal a few extra moments.

Now, this is not a story about how I suddenly changed my mind and invited my daughter and all my future children into my bed with me.  I still stand behind the decision that my husband and I made.  I like my sleep.  I like my privacy. And I like my daughter to have her independence from us. All that I am saying is that I get it.  I understand the beauty of those stolen moments with your child while she is sleeping.  And while my daughter is going to stay in her own room, I just might join her every now and then.

Quote of the Day: On Sleep (or lack thereof)

“O sleep, O gentle sleep,
Nature’s soft nurse, how have I frighted thee,
That thou no more wilt weigh my eyelids down
And steep my sense in forgetfulness?”

I am pretty sure that this the elegant way of saying, “C’mon Sleep!  What the fuck!?”

The comfort level of one’s bed is directly proportional to the volume of one’s baby’s screams.  Ie:  The louder and more urgent the cries, the more comfortable the bed… as in harder to get out of.  Unfortunately the inverse is also true.  Once the baby falls back asleep and volume level is low, the bed is somehow not nearly as comfortable, and therefore mommy is left tossing and turning for at least 1.5 hours, or as long as it takes for baby’s volume to again reach a dull roar.

Quote of the Day: On Sleeping

“People who say they sleep like a baby usually don’t have one.”
~ Leo Burke

The Good The Bad and The Saggy

Things I Have Written About